Of the more than 164 million individual income tax returns filed with the IRS last year, only 626,204 were audited—down from 659,003 during fiscal year 2021.  Of those 626,204 audits, 93,595 were regular audits while the remainder (532,609) were correspondence audits, which are usually done for simple mistakes on a tax return and can be easily corrected through mail correspondence with the IRS.

While the 2022 Inflation Reduction Act provides the IRS with $80 billion of future funding to ramp up audits of the wealthy, IRS revenue agents were only able to audit a small number of millionaire returns last year. During 2022, the odds a millionaire was audited by an IRS revenue agent was just 1.1%.

During FY 2022, years of budget cuts and increased needs in other sectors left the IRS with only around 1,400 staff-years of revenue agent time to apply to the 165 million income tax 1040 returns that were filed. Even though the IRS applied one-fourth of these hours to auditing millionaires, still barely over 1 out of every 100 millionaires were audited.

In place of face-to-face audits, IRS has increasingly relied on highly automated processes to send letters through the mail (a “correspondence audit”) asking for more documentation on a specific item. In FY 2022, 85 percent of what IRS counts as audits of 1040 returns were these letters. Even for millionaires the IRS has turned to these. Indeed, last year about half (48%) of millionaire audits consisted of these simple letter inquiries.

Adding those who received a letter asking for more documentation on a specific item, the odds of millionaires receiving some attention by the IRS rose to 2.8%. Yet this left somewhat under 700,000 millionaires—taxpayers reporting a million or more in total positive income—with absolutely no scrutiny whatsoever.

The taxpayer class with higher-than-expected audit rates—five and a half times more than nearly everyone else—was low-income wage-earners taking the earned income tax credit. This credit is provided to offset the taxes for the lowest wage-earners in the country.

This group of taxpayers has historically been targeted not because they account for the most tax underreporting, but because they are easy marks in an era when IRS increasingly relies upon correspondence audits yet does not have the resources to assist taxpayers or answer their questions. 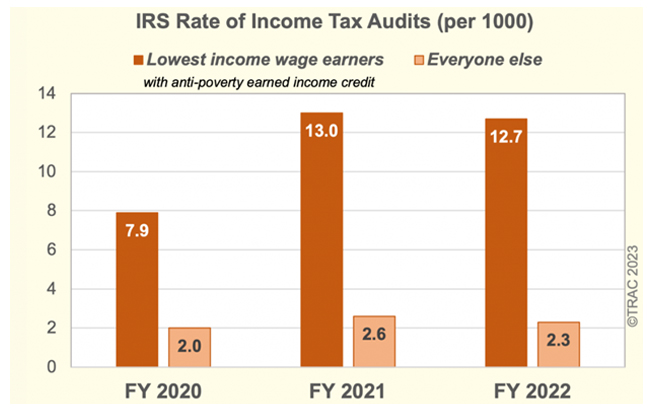 The IRS divides taxpayers into different examination classes. The IRS sees the typical taxpayer reporting an income of less than $200,000. These taxpayers faced an odds of audit of just 1.9 out of every 1,000 returns filed (0.19%). This group accounts for 80 percent of all 1040 returns once these poorest wage-earners and those reporting $200,000 or more in positive income are set aside.

Millionaires, as discussed previously, did have the highest odds of being audited. However, if one ignores the fiction of auditing a millionaire through simply sending a letter through the mail, the odds that millionaires received a regular audit by a revenue agent (1.1%) was actually less than the audit rate of the targeted lowest income wage-earners whose audit rate was 1.27 percent.

The information presented here should not be construed as legal, tax, accounting, or valuation advice. No one should act on such information without appropriate professional advice and after a thorough examination of the particular situation.